The signature of Roberto Coin

Roberto Coin has found the idea of presenting rubies as a discreet style symbol through ancient literature. The dedication that the famous designer nurtures against the written heritage has helped him to discover three unforgettable chapters, which he harmonically merged in the story of imagination and reality.

These stories contributed the gemstone to highlight the subtle power of feminine jewelry.

The first chapter is related to ancient Egypt. More precisely, the pharaoh believed that ruby, in contact with skin, brings happiness, which is also guarantee of love, joy and eternal health.

The second chapter tells a story of the fearless Burmese warriors who were convinced of the magic of rubies. They believed that stone, in contact with the skin, protects them from death on the battlefield.

The third chapter is the legend about a sign of Hindu mythology, in which the rugged rubies are regarded as valuable fruits of “caliph tree”- a traditional source of desire and hope.

In 1996, Roberto Coin started to decorate his jewels with Appassionata collection by setting a small ruby hidden on the inside of each piece, allowing the distinguished gem to kiss the skin.

From that moment on, with the combination of boldness, emotion and hope, Roberto Coin conveys the positive energy devoted to the ladies by the hidden ruby, with valuable details.

Rubies are unique among gemstones for their beautiful red color.

Clocking in at a 9 on the Mohs scale, these precious stones are among the hardest stones found in nature, second only to diamonds.

The largest cache of rubies in the world comes from Burma, Myanmar.

For centuries, the Mogok Valley has produced the most celebrated rubies. Though the largest source of rubies, Burma is not the only source of these stones.

Mozambique has a ruby mine at Montepuez, where stones are mined under strict guidelines for ethical and transparent sourcing.

The ruby has always been attributed great power, and so has been the stone of choice for rulers and royals.

In the Kingdom of England, the rubies in the tiara are a symbol of the long, happy and healthy life, mirroring a strong message to the queen.

And even Dorothy in “The Wizard of Oz” received protection from her ruby shoes.

The ruby is the only jewel referenced in the Bible, as well in “The Travels of Marco Polo” writing. William Shakespeare, John Donne, and John Milton all wrote of the ruby as a stone meant for royalty, for crowns and for poetic descriptions of maidens’ lips.

Roberto Coin is a name that implies moments of joy and excitement, a name that means stylistic originality and design in any language.

Roberto Coin is a name that implies moments of joy and excitement, a name that means stylistic originality and design in any language. 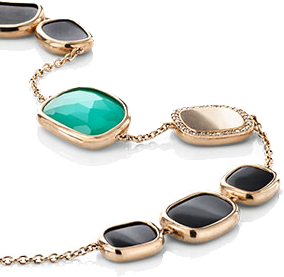 With effect from Thursday, May 13th 2021, Rolex boutique Porto Montenegro will be welcoming again admirers of an exquisite timepieces.

TUDOR’s tradition of creating unique diving timepieces dates back in 1958. Named after that historical year, the Black Bay Fifty-Eight “Navy Blue” is the last inheritor of an extremely popular collection.

In the spotlight
Messika Move necklaces

Atelier Messika once more redefines the standards of jewelry craftmanship, exceeding the horizons of excellence.

Named after the Italian word for one hundred, symbolizing perfection and completion, Roberto Coin has created the mesmerising CENTO diamond with 100 facets.